It’s now a beautiful day, sunny but moderate in the shade (probably boiling in my apartment). Eating leftovers from my Mr. Bento box outside the NY Public Library on 5th Ave. Celebrating. I had my first NY audition this morning in this, the new chapter of my life.

My sleep last night was atrocious, it being incredibly hot in the apartment. It didn’t cool down until 4 or 5 in the morning, so I relied on the big fan, frozen washcloths and nudity (!) to sleep. In any case, a cold bath and coffee helped me wake up at 7:30 am to leave by 8:30 am to get there by 9:30 am.

I made it to the audition location on West 54th by 9:10, carrying my purse and rolling bag.* The audition process itself was exactly like those in Los Angeles. The girls looked the same, I did my song the same. I was happy to see that about 1/6 of those signed up for the audition showed up (I was told earlier by a regular auditioner that this is common in New York), so my number fell from 191st to only 37th in line. I checked in, warmed up in the hallway and the elevator, changed and then stood in line when the 20-40 block of numbers was called.

My audition itself went exactly as it would if I was in Los Angeles. However, there was something wonderful to have the view of grey and red-tinted New York buildings outside as I sang. A reminder – I was in New York!

I finished and thanked the people in the room. As I picked up my music book from the piano, I couldn’t resist saying “And I have to let you know, this was my first New York audition. Yes!” The older woman in the room said “Oh! Congratulations!” and then looked at my resume again with a more curious look on her face. One might think this gesture of mine as unprofessional, but I just felt I needed to claim my experience and not hide my new life from myself or anyone else. It just felt good to say it, and if my enthusiasm belied my lust and zest for this craft, then all the better.

I was out of there by 11 am. Now, I’m sitting and listening to old recordings of Barbara Streisandon my iPod. Have called both Mom & Dad to leave word about this “landmark” (dramatic word, I know) day of mine. Soon, it’s off to drop off my timesheets to my temp agency (#1 of 3) so at least I’ll have money on Weds. The grind continues, but at least this career of mine is heading in the right direction.

*see earlier blog for a description of my “Audition Kit”

For my first audition here in New York, I packed what I thought would be a well-thought out bag of travel and acting items. This was based on my own needs as well as outside advice from fellow New York actors. 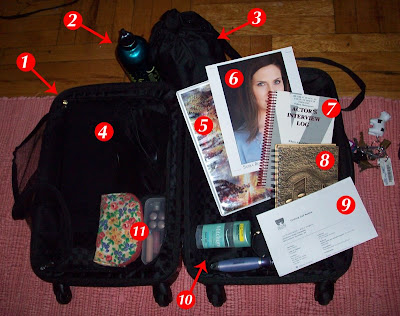 Not pictured: iPod (to review audition music or hear a warmup track), Mouthwash (again, just in case) and an immeasured amount of talent and beauty 🙂 All in all, everything I packed was either utilized well or at least good to have on hand. Nothing was too heavy and the rolling bag worked in the subway like a charm.-Si

So, I’ve finally pressed myself against a wall and told myself “It’s been 2 months since you left Los Angeles, and a month since you moved into your apartment. You get in that ring and give it all you got, go get ’em Tiger!” Meaning, I have put my name on an Equity Chorus Call to audition tomorrow. It’s for “Les Miserables,” which is a nice and traditional show, my voice fits the legit style so it’s not a huge stretch. Unfortunately, I’m #191 on the list, so my day will no doubt be spent in line, waiting.

This week, I worried about what might come out of my mouth tomorrow, vocally. I haven’t been to a voice teacher in 2 months. I vow this day forward to vocalize each day and resume the study of my craft. I had a mini-vacation from my career as I made the biggest career move to date. Now it’s time to get my engine restarted here in New York.