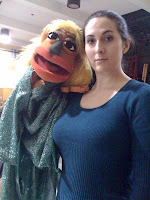 The show, “Ruddigore,” is one of Gilbert and Sullivan’s lesser-known pieces, but the reinterperetation behind this version is indeed quite interesting (members and staff of a sanitarium produces “Ruddigore” as an annual musical – “this” year is the 102nd or so – so actors are playing mental patients who are, in turn, playing G&S’s characters).

The thing that truly caught my attention was that there will be PUPPETS utilized in the show, and I will be playing one character who practically relies on her puppet. I’ll be playing the “bridesmaid” Ruth, who is “played by” a mental patient who only feels comfortable communicating through a hand puppet. So, technically I’ll be playing two people, yet three “characters.” In other words, it will be an actress (me) playing a character (the mental patient) who needs a puppet (the puppet Mathilda – in above picture) in order to perform the character of Ruth the Bridesmaid (original G&S creation). There are so many layers, and I’ll just have to find out what makes logical sense to the character and have some fun with the G&S libretto.