While I was leaving the free yoga class (free ’cause I won a month membership! Yay!) from Levitate Yoga on 49th street, I was startled by the peal of church bells across the street. I was also then startled to recognize a popular musical theater tune by a particularly famous musical theater composer.

Listen to it here.

The church is Saint Malachy’s, The Actors’ Chapel. Fitting…! 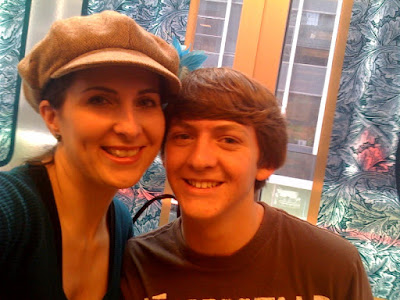 One of the great joys of living in NYC is that it is a mecca for creative people. So, I was very excited to hear that Troy Hussman (a young man who I performed with in “Great Expectations” the musical in Los Angeles while it was at the Hudson Theater) was coming to New York with his friend Sy Adamowsky (a NY/NJ native) to see musicals and hang out. Troy and Sy worked together last year on the tour of the Radio City Arena Tour doubling the same part, and they will again this year too. Both boys are super-nice, professional, talented, and way ahead of the game compared to me, so I’m very jealous.

The cast & bio of Troy and “Great Expectations” as performed at the Odyssey Theater can be found here. Sy Adamowsky’s web site is here, and you can see them both alternating a role at the Radio City Xmas Show National Tour.

The show I did for Theater Ten Ten last May, “Ruddigore,” has been nominated for a New York Innovative Theatre Award, which were announced today (July 20, 2009). The nomination is in the category of “Outstanding Production of a Musical” and I was happy to note that my friend Sarah Lowe’s show “The Apple Sisters” shares the spotlight in that category as well.

Congrats to everyone involved!

July 20, 2009
The New York Innovative Theatre Foundation announced the nominations for the IT Awards, and the Theater Ten Ten production of “Ruddigore, or the Witch’s Curse” (featuring Sierra and her puppeteering skills) was nominated for “Outstanding Production of a Musical.” For more information visit www.NYITAwards.com. Read a review of the production here.

July 16, 2009
Sierra sang for Ritt Henn’s Big Night Out Composer Showcase, singing a wonderfully funny song by Ritt Henn and D.C. Anderson regarding a certain part of her anatomy…For more information: www.ritthenn.com and www.dcanderson.net. To view video from this event, click here.

My friend, Samia Mounts, can SING. She’s awesome – high belt and soprano, sass, young and positive energy. She invited me to the Sequoia Restaurant down at the end of Pier 17 in South Street Seaport to see her sing in a band called Brother Joscephus and the Love Revival Revolution Orchestra. I didn’t know what to expect, but showed up to see them just as they were doing a sound check.

But the SOUND eminating from this band is amazing – a huge mix of New Orleans traditional jazz-gospel(the drums and brass section played a bit outside while the girls danced to busk tourists from the outside in, playing “When The Saints Go Marching In”), plus Funk Rock, R&B, and even some old-fashioned popular music from the 1900’s were included. But all the music was dance-able, heavy-beat and had tight, complicated harmonies. I was particularly struck by how amazing their arrangements were: these were not songs that merely were sung-through, but original and cover versions that had archs and depths, stops and starts, humor, musical homages, tight harmonies, and ebbs and flows. It was unexpected music – both traditional and zany. You could tell these band members have rehearsed and played a lot together; there was choreography, and everything was done with both easy-going grace and precision. The pianist, who also played xylophone, conducted this jazz/funk orchestra while wearing a full suit, gloves, goggles and a gold & purple king’s crown.

I felt that the band was almost too big for the back of the Sequoia bar – the band’s high and theatrical energy almost demands a full stage and dance floor to complement them. They played BB Kings a few weeks ago, which sounds perfect. I can’t wait to recommend them to friends for other venues, New Year’s Eve parties, hell – even big-blast wedding parties and birthdays could enjoy their work.

“Brother Joscephus and the Love Revival Revolution Orchestra is a new act that has recently completed its first recording (debut CD released Feb. 24, 2009) & in its short history has already shared the stage with New Orleans stalwarts such as Trombone Shorty, the New Orleans Klezmer All-Stars and Eric Lindell. The band is a musical and visual spectacle of such ferocity that it leaves all in attendance shouting “Amen!” and dancing in the aisles. It’s like a big ol’ shot of love and adrenaline. It feels that good.

BroJo blends together the perfect gumbo of New Orleans party music, Soul in the style of Ray Charles and Al Green, a good helping of jam-bandy Roots Rock and a righteous splash of good, upbeat Gospel without the religious overtones (we like to call it “Secular Gospel”).

Each BroJo tune has been meticulously arranged for the Love Revival Revolution Orchestra: The three-piece horn section (the Shepherds of the Wind), the gospel choir (the Voices of Reason), and the most righteous rhythm section (the Guardians of the Groove) lay it down for Brother Joscephus to sing about the pain, joy and wisdom that is in his heart.

The core group is twelve pieces, but the Revolution been known to expand to over sixteen (adding additional members to the gospel choir, mandolin, percussion, etc.) and can also play a stripped-down version with as little as four brothers and sisters of the Revolution.

But a Brother Joscephus show is more than just the music – there is also an emphasis on spectacle and pageantry. The band is decked out in their finest whites (accented with the appropriate gold, purple and green of Mardi Gras). They break out parasols, march through the audience and throw out hundreds of Mardi Gras beads over the course of a show.

When the band starts vibing with the audience you can’t help but have a good time – it’s undeniable!!”

This funky, funny, tall composer/singer/bassist was the Winner of the 2005 Back Stage Bistro Award forOutstanding Songwriter/Instrumentalist and 2005 MAC Award Winner for Best New York Debut-Male. He is a great, quirky guy! I will be singing an amazingly funny original song of his co-written by D.C. Anderson. Hostess with the mostess Jennifer Wren will be on hand to run the open mic and keep the evening flowing, and Bill Zeffiro will be on piano.

Ritt has a number of CD out now, including the latest one, Timber.

Details on the evening: This goes out to all those John Hall’s UCLA Musical Theater Workshop peeps!
I had a fantastic time last night. Fantastic. First, went to Don’t Tell Mama’s to sing backup with Amy Rutberg for Tom Lenk’s “Last Minute Show” and Michael Hicks at the piano. It was a UCLA reunion and a wonderful, silly time to be had. Tom sang Britney Spears, did standup, and performed comedy sketches with Amy & I. I even got to combine my geek and opera identities by singing the soprano theme to Star Trek and salute the fellow Trekkies in the audience with a Vulcan “Live Long and Prosper” gesture (after hitting the high note, of course). Friends from the “Rock of Ages” production staff – including Kristin Hanggi (who I can now call “Tony Nominated Director”!) – were there to howl at Tom’s honest accounts of his “Buffy The Vampire” celebrity. And my friends Sergio Lobito and Jordan Yanco came by as well!!!
After that, I headed over to Wednesday Night at the Iguana, where I was able to close the evening’s open mic by singing three of my favorite songs. Richard Skipper and Dana Lorge were incredibly funny, witty, and gracious hosts, and even after a few false starts on my third song, Barry Levitt on piano and Saadi Zain on bass kept it all playing smoothly. My UCLA pianist/composer friend Brian Allan Hobbs and his friend Arianna came by to watch me sing. Then Maria T. Eberline, a good UCLA buddy, met us after her evening show. She had jsut returned to New York to perform in “Wicked” for the remainder of the month (covering Elphaba). She’s got an adorable 10 month old and a handsome talented husband, and yet she doesn’t look a day older. We reminisced about our UCLA shows until a wee hour, and then headed home.
All in all, a great night of singing and friends.

My good friend from my UCLA years, Tom Lenk (he played the Balladeer in my production of “Assassins”, but is *more* than likely known for his role of Andrew in “Buffy the Vampire Slayer”) has asked me and other UCLA alum Amy Rutberg (who was double-cast with me in “Into the Woods” as the Witch in UCLA!) to sing with him in his one-man comedy-musical-sketch hour at Don’t Tell Mama’s!

Come enjoy the laughs, the music, the UCLA Music Theater Workshop vibe…it’ll all be there.

SHOW #2: Travel with me, or meet me at the Wednesday Night at the Iguana Showcase, hosted by Richard Skipper and Dana Lorge at the Iguana Club, they’re opening at 8pm and running until 11pm. I’ll probably close the show, but please come early to watch all the rest of the fabulous singers. Information for this show can be found in my previous post about the event.