“Smokin’: Warning: the Songs of Jay Alan Zimmerman” is on Broadwayworld.com <---Check it out! We’re also listed in the nydailynews.com and TimeOutNY’s online listing. Jay loves the TimeOut description of the event: “Five singers and a puppet give musical advice about vice.”

Kay will be so happy to read that!

I had a wonderful, music-filled past couple of days. Sunday afternoon, I hiked over to New Jersey to meet up with a quartet of mine. We’re rehearsing for a December-planned project (due for an announcement soon – we just have to get the details ironed out). After that, the home we were rehearsing in was filled with Christmas Carolers for our first full rehearsal of 2009. We have a few terrific new additions to the group, who will undoubtedly look and sing fabulously in quartets. (www.definitelydickens.com is the group, we’re for hire come Thanksgiving). So that lasted until 9pm, and I got home around 10:30pm.

Then Monday reared it’s beautiful head, in that I had even more music to apply myself to. I showed up at the Duplex cabaret theater on Christopher Street to Tech through “Smokin: Warning: the Songs of Jay Alan Zimmerman”, performing there next Monday night. To read more info about it: www.jayalanzimmerman.com, or read the post below this one. Kay – my puppet, who has a solo in the show – got to experience the stage for the first time and I had to re-think some choreography with her due to the use of a microphone stand. I then cut out of the theater right on time to get to Chelsea Studios for an appointed audition call for “Emmet Otter’s Jug Band Christmas” show (role of Mrs. Mink). Those guys from Goodspeed (they were all men in the room) were so sweet and funny, and there were a lot of good vibes in the audition.

I had just enough time to relax a bit, curl my hair, then head on out to Birdland to experience Jim Caruso’s Cast Party open mic for the first time. As soon as I stepped in, I was impressed by the venue. This was a serious night club, gorgeous interior and setup. My knees knocked a bit at the thought of singing here for the first time. Pianist Tedd Firth was there, as was Steve Doyle on upright bass. Those guys are terrific, and were able to handle every bit of music put in front of them. Scott Siegel hosted the evening (in place of Jim Caruso, who is in Las Vegas) and – in a great hosting gag – changed into as many differently colored shirts as he could throughout the evening.

I sang “Thanks a Lot But No Thanks,” and Tedd & Steve followed and played and ebbed and flowed around my vocals effortlessly. I want little pocket versions of them to carry around, but NO I have to go to Birdland to sing with them when I want to. Reality sucks…

There were many singers of amazing talent and caliber there. Scott Coulter of Spot On Entertainment opened the evening, introducing me to his gorgeously pure tenor voice and smooth jazz tones. Mark Watson sang “Begin the Beguine” WITHOUT THE MIC in a semi-audition for Scott’s upcoming Broadway Unplugged concert. The room’s not acoustically made for unmic’d voices, and I was sitting far in the back row of tables, but Mark’s voice was huge, strong, and with perfect diction. I could hear it all. Danielle Grabianowski and Sigali Hamberger, two ladies I know from Big Night Out and 1930’s Idol, were in attendance and sang. I know Danielle has a show of her own October 30th and November 4th, and Sigali will be a featured singer on November 5th’s Big Night Out showcase after her win at 1930’s Idol this year.

Rob Langeder sang a popular Portuguese song (argh don’t remember the title) and threw out a wonderful series of vocal scatting towards the end. He has a show coming up on the 30th and 31st for Halloween entitled “UnDead in Hell’s Kitchen.” Christine Pedi sang “Otto Titslinger”, a funny song about the creation and theft of the now much-appreciated boulder-holder. Ray Jessel also sang two songs, the first was his MAC-award winning song about a lovely lady’s certain…um…surprise…and the second was a cute song about turning “80,” which indeed Jessel is doing in a week or so. Newcomer-to-Birdland-as-well Candy Benge also sang – she has a lovely high soprano trill!

However, the jaw-dropping surprise of the evening came early on when a 13-year old boy named Beca (spelling? Last name? I’ll try to find it!) replaced Tedd at the piano and performed his own jazz piano song. Steve joined in as well, and the entire room was hushed into astonishment. This kid already had “it” – he was stunning in his jazz interpretive skills and knew even how to mimic Steve’s musical lines as well. I was shaking my head with disbelief at his maturity and skill. I want to find out his name just so I can warn the music world to watch out for him!

I came home happy and fatigued, although I could have listened to more open mic music for a few more hours, it seemed. A memorable few days of music, that’s what keeps me going! 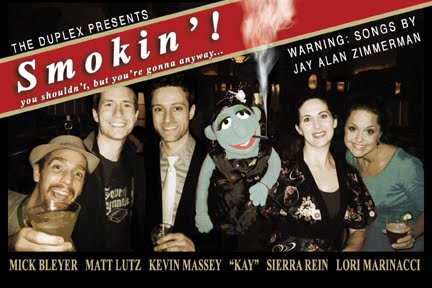 It’s all written by Jay Alan Zimmerman — who really should give up music because he’s deaf now, but what the #$@%?!

SMOKIN’! is only 10 bucks, and because you need to stop drinking, there’s a two-drink minimum. Sure, it’s hazardous to your health, but it’s gonna feel soooo good.

See all three videos of Sierra in 1930’s Idol in this YouTube Playlist.

A week or so ago, I used my @SierraRein twitter account in a Backstage.com contest for Actorfest.com (a convention for Showbusiness people – behind the camera/table and in front). The challenge was to respond to the question “Why should actors attend Actorfest?” in 140 characters or less, after of course following @ActorFest. I obliged – usually these are just to get cute prizes and help a company create buzz and some interesting sound bytes/tweets for their own marketing. My husband & I participated in the Mountain Dew tasting competition with our puppets and got a flip phone, and recently he won another digital video camera via Kodak with his involvement in trying to name a new upcoming camera. In any event, these Twitter competitions are usually harmless, take 15 seconds to do, and you usually forget you entered them…

“@actorfest Because us actors are the CEOs of our individual slice of the Show Biz pie. Proactivity + creativity in 1-Actorfest helps us.”

You can tell my copywriting talents were in full gear there. I can also hang my head in shame as the daughter of an English Professor…it should have been “Because WE actors are”…ugh! 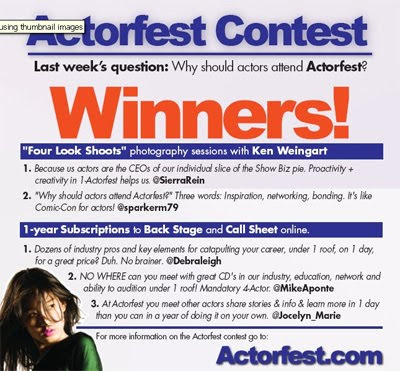 If you read that carefully, I won a “four look shoot” with headshot photographer Ken Weingart, who looks to be a fantastic, celebrity and headshot photographer. Check out www.kenweingart.com. This is great news for me, since I’m hoping to get going on an enhanced branding focus by working with Doug Shapiro of TheSavvyActor.com. It feels like Kismet – just last night I took a free seminar with Bobbie of BobbieHorowitz.com, who specializes in image, color, and style consulting to make your individual style and personality shine. The combination of these three events are telling me one thing: revamp, restyle, refocus myself. So, I hope some good haircuts, good photos, good clothes, and great attitudes come out of this. Hurrah!