So excited for our soon-to-be debut!!!

GOVERNOR PATERSON IS ASKING THE STATE SENATE TO VOTE ON S.4401 IN THE SPECIAL SESSION BEGINNING NOVEMBER 10TH.

ALREADY SENT A LETTER AND MADE A CALL? DO IT AGAIN AND REMIND YOUR STATE SENATOR THAT YOU SUPPORT MARRIAGE EQUALITY FOR ALL NEW YORKERS.

The bill to bring Marriage Equality to New York has reached the State Senate..
And out of state opponents are doing everything they can to stop it…
BUT NOTHING IS MORE POWERFUL THAN YOUR VOICE.

Physical letters are the most reliable way to impact your
State Senator and ensure your voice is counted. Write, then call.

Write a Letter then Call Their Office

By clicking the above “Write a Letter” link, you will be able to send this email, which will also be hand-delivered to the Senator of your zip code:

“Senator-
I, like you, am one of the 53% of New Yorkers who want to see Marriage Equality legalized in the State of New York. I live in your district, and it makes me proud to know that my State Senator is right on this issue. Governor Paterson has proposed legislation, the Assembly has a record of approving it, and I support your effort to bring it to a vote in the NYS Senate.

Please use this letter in any way you can to help bring your colleagues around on this issue. We need to let this legislation have a hearing on the floor of the Senate. Debate the bill on its merits. Put it to a vote. Let us see democracy return to Albany. Let us have marriage equality.” 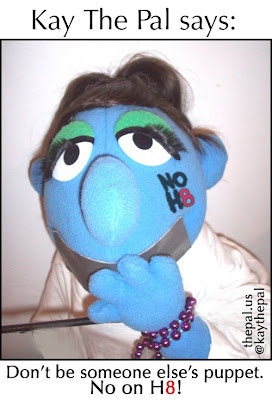 @KayThePal says: NO H8!!! http://www.noh8campaign.com <-- go and take or get instructions to submit your own NoH8 pic!

To see our calendar dates on the Metropolitan Room web site.