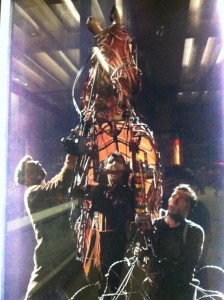 While I have been extricating myself from New York life in preparations for my Disney cruise job, I had a bucket list of restaurants to eat at, places to visit, and shows to see. This week I was able to finally see the Broadway show “War Horse” before I left and before it closed in January – I saw Wednesday’s performance (September 12th) at 8pm. I’ve since learned that it’s playing in Toronto, where I’ll be heading, and I will do my best to see the Canadian cast while I’m there – it’s that great!

I’m a huge fan of puppetry, and all the footage and photos of the “War Horse” puppets made me want to see this show. But it was more than just puppetry that makes this show immensely beautiful and heartbreaking. It is a pure ensemble cast, full of physical and vocal storytellers. The choreography demands in setting scenes, moving the props and set pieces, and the effort involved in seamlessly traveling from British countryside to French World War I battlefield was so inspiring and awe-worthy. The use of light, sound, puppetry, humor, and realistic costuming (not to mention the acting by the performers) transformed the thrust stage into a storytelling marvel.

The ability to take an inanimate object and breathe life into it has always fascinated me. And watching “War Horse” reminded me of the power of granting the audience the ability to believe that a horse can appear on stage and have a personality as rich and connected as any human character. When Joey the Foal stood on stage for the first time and snorted, tears welled into my eyes. Yes, full-grown humans stood and manipulated the puppet, but as they took care to bring the horse to life, the humans faded from my vision. All that stood was the horse, and I was only reminded of the human element every once in a while. That’s masterful storytelling in my opinion. And when the life literally left other ensemble horses on stage, literally and figuratively, it revealed how the puppeteers are able to take a collection of wood and metal and leather and create something big and staggeringly “alive.” Watching the puppeteers was a Master Class in giving the object weight, resistance, breath, focus and point of view – all the elements that make something specifically alive in our estimate as fellow creatures. It was marvelous to see a beautiful, sad, frightening and heartwarming story told to us via the skeletal essentials of the stage.

If you are able to see it on Broadway, do so. Or catch it in Toronto or one of the touring shows. It’s not a star-studded show, but a brilliant application of every aspect of theatrical story-telling that will make you view the power of imagination in a whole new light.

And you must see the Goose…oh the Goose!

My husband Pete & I went to a free screening last night of an independent movie ($1 million budget!) called “We Made This Movie.” Not only was it a fun experience stepping into the Ed Sullivan Theater for the first time, it was a great movie to see! “We Made This Movie” starts out as a series of behind-the-scenes footage showing a high school student’s attempts to make a “Jackass”-like movie. However, as it progresses the movie reveals itself to be a coming-of-age film about young-adult relationships and the struggle to rise out of a dead-end small-town life. It’s a truly sweet, funny, and heartfelt movie. Although it is a one-camera film (according to Director Rob Burnett), the film looks like it was shot on multiple cameras (a stunning editing job!) and the young actors playing the high school film crew did a fantastic job – you truly rooted for each and every one of them, and understood their struggles and issues. And yet it’s hilarious and funny and sometimes (sweetly) crude. From the interview, we gleaned that it was mostly scripted but that improv from the actors (some of whom are trained improv writer-actors) was included. A few lines had us giggling in our seats for minutes after…

I was quick to Facebook-message the director, Rob Burnett, after the viewing with this anecdote: “I’m about to head off away from my husband for 9 months on a cruise ship gig (as a singer), so the scene about leaving for Yale resonated even for me…My husband, sitting next to me, grabbed my hand at that moment, so we wordlessly recognized it together. And of course, as a creative couple (he’s a writer), we both appreciated the message of doing whatever you can to express and create and fight being stuck in whatever situation you don’t want in your heart of hearts to be in.” His reply: “It is always so satisfying when you feel like you have connected with an audience member, that they got what you were going for on all its levels and nuance…Good luck on the singing gig. Thanks to you and your husband both for coming tonight and spreading the word about our little movie. Our only chance to be seen is through people like you.”

I highly recommend seeing this movie, which is a compact 90-minutes and is thoroughly fulfilling. You can see the movie in it’s entirety online September 20th, 6:30pm (7:25pm screening start) Online Premiere (check out this link HERE for information and to Register): Watch the movie online for free, plus view extras like Red carpet arrivals and celebrity interviews, opening monologue by Jim Gaffigan, Twitter commentary by comedy writers, and a panel moderated by Michael Ian Black and Tom Cavanagh (MATES) with co-writers Jon Beckerman and Rob Burnett and the WMTM cast.

I heard that it will also be available on DVD, on iTunes, on Hulu Plus, and on Netflix and other streaming-media resources in the future. So keep an eye on the title “We Made This Movie” and catch it if you can!