Sierra can be seen in a Narrated Concert version of the new musical “Rip!: A Story of Love, Revolution, and What Is Possible”, a “radical reimagining” of Washington Irving’s classic “Rip Van Winkle,” at The Reformed Church of the Tarrytowns on October 12th, 2013 at 7:30pm. Music and lyrics by Dan Furman, with additional lyrics by Mary-Liz McNamara. Suggested $10 donation at the door. The Reformed Church of the Tarrytowns is located at 42 North Broadway, Tarrytown, New York 10591 – 34 minutes by train from Grand Central plus a 10 minute walk. There is also a 3:30pm tour of Washington Irving’s home; that, in addition to dinner in Tarrytown and “Rip!” the musical, will make quite a grand day out! 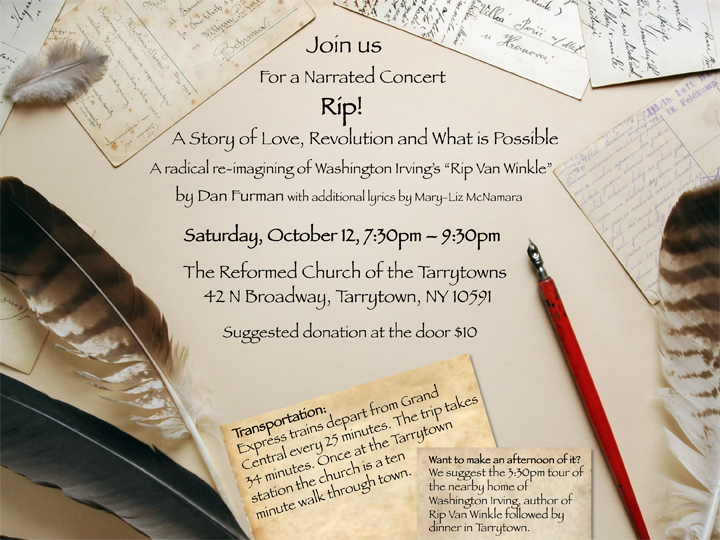 September 15, 2013
Marquee Five performed in “Sondheim Unplugged” at 54 Below, Broadway’s Supper Club, on September 15th, 2013. They shared the stage with special guests and Broadway greats Dee Hoty, Pamela Myers, Sarah Rice and Alice Ripley, Trent Armand Kendall (Broadway’s Smokey Joe’s Cafe, Into the Woods), George Lee Andrews (singing a cut song written for him when he created the role of Frid in A Little Night Music), original Anyone Can Whistle castmember Harvey Evans,T. Oliver Reid (Broadway’s Sister Act, The Color Purple), Marquee Five’s own Julie Reyburn (MAC/Bistro/Nightlife Award winner) and Lucia Spina (Broadway’s Kinky Boots, South Pacific). Read more about it on Broadwayworld.com. View Photos and watch a Video of the event on Broadwayworld.com (audio of Marquee Five singing “Sunday” is at 2:05 mark and video at the end)

54 Below is located beneath the legendary Studio 54 at 254 West 54th St., in the heart of New York’s Theatre district. There is a $35 cover charge, as well as a $25 food/beverage minimum (a full dinner menu is available). 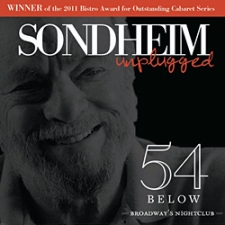 A celebrated New York event since 2010, the Bistro Award-winning series Sondheim Unplugged features some of Broadway and cabaret’s most dynamic voices, accompanied by piano only. Expect tunes from A Little Night Music, Company, Into the Woods, Follies, Passion, Dick Tracy, and more. Past special guests have included original Sondheim cast members such as Len Cariou, Victoria Mallory, Donna McKechnie & Chip Zien – so you never know who might drop in. Sondheim Unplugged is hosted by series creator Phil Geoffrey Bond, who will fill the audience in on Sondheimien facts, history, and assorted tidbits of theatrical lore!