The 2011 MAC Award Nominees were announced today at 1pm, and I am proud to say that Marquee Five has been nominated in the Duo/Group category for the second year in a row, this time for our show “8-Track Throwback,” which will be made into a CD this year thanks to our wonderful Kickstarter.com Producer-backers!   The winners will be announced at the May 10th MAC Awards ceremony.  I congratulate all the wonderful 2011 nominees (who include Julie Reyburn in the Major Artist category and Mark Janas in the Open Mic/Host categories)!!!  A full list can be downloaded at www.macnyc.com or viewed on today’s Playbill.com article. Onward!

It was an emotional yet extremely fun four-day weekend for me (well, every day is a weekend when you’re looking for work, but I *worked* over this Saturday and Sunday)!!!

Thursday was my Birthday, and for the most part I puttered around the house, cheered when cards and Facebook messages came through, and was very excited to see Marquee Five‘s Kickstarter campaign rise in pledge amount. Pete & I went to Pinkberry first for dessert (nummy!) and then came home and ordered sushi delivery (empiretogo.com delivers!). Got the calls from the folks as well (my Mom always calls at 9:44 am, and my Dad & sister serenaded me in the evening).

The next day, I was up early and bundled up (not enough, apparently) to sit and shiver in the cold with fellow family members at the Triangle Shirtwaist Factory Fire 100th Anniversary Commemoration Ceremony. Read my blog entry from last year about what I experienced for the 99th anniversary ceremony. It was an amazing experience to sit in the VIP section, right against the side of the Brown Building (formerly the Asch Building) where the fire broke out, and near to where my Great Grandmother Gertrude “Babe” Lubar must have stood to watch the disaster…100 years ago to the day. I sat next to the daughter of Leigh Benin (co-author of the book “The New York City Triangle Factory Fire”); his grandmother’s cousin, Rose Oringer, perished in the fire, and his daughter wore a pin displaying a saucy, full-of-life portrait of Rose on her jacket. CNN interviewed Leigh for an article published on Friday entitled “Remembering the Triangle Fire 100 Years Later” and is seen in the HBO special “Triangle: Remembering The Fire.”

More pictures from the ceremony can be viewed at this blog entry here.

The ceremony (which was introduced by an hour of songs, speeches – yes, with Bloomberg being boo’d a bit – and some theatrics) was simple and met the same structure as last year; a ladder was raised to the 7th floor, below where two purple banners waved in the 9th floor wind, placing a signpost of sorts to the windows where most of the women jumped to their deaths; Firemen and Firewomen, dressed in their sharpest dress uniforms, were called to attention, and the bagpipes played Amazing Grace; then, 146 white carnations were placed in a pile by family members and school children, each helping to read off all the names of the victims. We left, had brunch together as a family, and then I had to race off to Chelsea to have an audition for The Marvelous Wonderettes. You’d think a morning of reflection, anger, sorrow, and mourning would inhibit my singing; on the contrary, being reminded of my Great-Grandmother’s survival, and the struggle for Unionization (and later, the right to vote) of her generation gave me a stronger wind to sing my heart out, knowing how much freedom I had to do what I wanted to do with my life.   I had a great audition, and went home to watch movies and snuggle with my husband and cats.

Saturday was filled with music as well!  Marquee Five met at the Laurie Beechman Theater at 1pm and tech’d through our 2010 Fall show, “8-Track Throwback.”  We performed it at 4pm to a lovely big crowd, and it really was one of the better performances of ours.  I was so happy to see a lot of friends from college, from Definitely Dickens, from Cabaret and musical theater in the crowd, and was thrilled that my Twitter-musician friend Jim (goes by @TriangleJazz, visiting from Utah to go to the Triangle Anniversary) even came to see the show!  I then traveled a few blocks north to go to Sue Matsuki’s “People You Should Know” show at Don’t Tell Mama, and was treated to music written by Harriet Goldberg, Mary Liz McNamara, Scott Evan Davis, and Sue Matsuki herself. I walked out of Don’t Tell Mama with sheet music of some of the best songs in my hands, too! I went home tired and oversung a bit, but happy, and snuggled with the hubby and cats again.

Sunday was the motherload, the day that gave me the ultimate Birthday gift. I basically spend it with 4 of 5 Marquee Five members plus Mark Janas, as we rehearsed and performed through two church ceremonies (morning and afternoon) for Lent at Father Jeffrey Hamblin’s Christ Church in Bay Ridge. We all then jumped in the car to rehearse and prepare for our evening co-hosting The Salon with Mark Janas. The full night’s events were blogged by yours truly here, but I’ll quote the essential moment that made my Birthday weekend magical:

“We then had a unique and totally unexpected Classical Corner. Unbeknownst to us, Mark Janas chose to open up his time to “auction off” requests from him and from Marquee Five to raise money for our Kickstarter fund. Now, at the beginning of the evening, we had a little over $600 to go, but by this time we had checked our emails and were shocked to realize that we only had a little left to go due to some online backers suddenly coming out of the woodwork. Mark called the bidding to start, and immediately the shout of “COPACABANA” rang out. So, we ran up and sang this goofy, wonderful song from our show (arranged via who-knows-what-part-of Adam West Hemming’s-brain). Then, we had a shout out for “Frankie and Johnny,” a song from Julie Reyburn’s Feinstein’s show. She jumped up to the mic, pear martini in hand, and hilariously brought the song forth (with Mark playing piano from memory). Then, a request for “Simon and Garfunkel,” came out, and at that moment we realized that the Salon had come through for us; we added their donations to our online backers, and we unofficially had achieved our $15,000 CD fund goal! With lumps in our throats (sniiiiiif!) we sang “The Sounds of Simon and Garfunkel” and then took a break to thank our amazing Salon family.”

So, yay! We funded our Kickstarter campaign and Marquee Five is going to be recording our debut CD!!!! So happy… 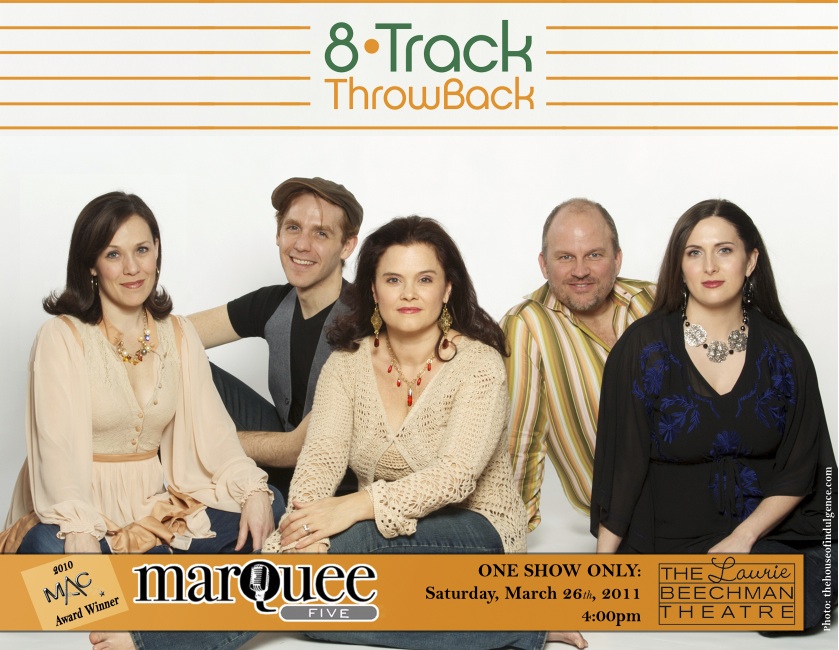 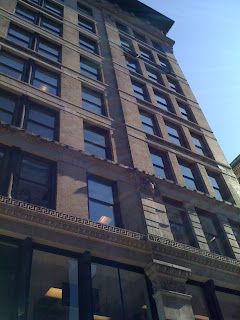 March 26-30, 2011
After a successful show at the Laurie Beechman Theater, Marquee Five has been nominated for their second MAC Award (Vocal Group), and is heading into the recording studio to record their debut CD, “8-Track Throwback.”

March 19, 2011
Sierra sang as a guest performer at “Places In Between: An Evening with Thompson and Mann” at The Duplex. She performed “Safe Harbor,” written by Jonathan Larson Award- winners Jeff Thomson and Jordan Mann, along with Artistic Director Alexander Rovang. Information: www.thomsonandmann.com

From “bare,” the musical, as Nadia.

Thanks to Brian Allan Hobbs for playing piano, Arianna for videography-ing, and Damon Intrabartolo and Jon Hartmere for writing such a beautiful musical.

Ya got some cash to spare? Help Marquee Five record our CD. Nothing to it. 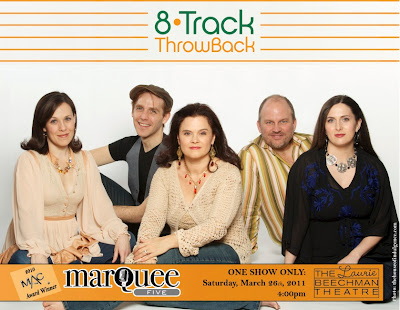 Following a MAC Award-winning run of their debut act, the 2009 “We Can Make It: The Songs Of Kander & Ebb,” Marquee Five brings their acclaimed 2010 show to the Laurie Beechman Theater for one performance! “8-Track Throwback” pays tribute to the singer/songwriters of the 60’s and 70’s with all new arrangements by Adam West Hemming. Featuring your favorites from Stevie Wonder, Joni Mitchell, Carole King, Leonard Cohen and more, “8 Track Throwback” is a re-imagined and joyous celebration of the music that takes you back.

Joining them will be Mark Janas at the piano, Matt Scharfglass on bass, and guitarist Tony Romano.

ALSO
Marquee Five’s Kickstarter Campaign is ON!
http://kck.st/hsxlAE <— Donate and pre-order your CD of “8-Track Throwback,” and see what other fabulous thank you gifts you can receive for pledges. www.MarqueeFive.com